House of the Dragon’s season 1 finale delivered a gutting blow to now-Queen Rhaenyra Targaryen, and many viewers too. After trying to hold off the impending civil war between the greens and blacks, her peacemaking stance is changed when her and Laenor Velaryon’s second son, Lucerys, is killed. The tragic loss sets up more bloodshed as we look ahead to season 2. Here’s what to know.

Queen Rhaenyra sends her two oldest sons, Jacaerys and Lucerys, as envoys to confirm the support of their potential allies across Westeros as they prepare to take action against the greens. Luke, on his dragon Arrax, flies to Storm’s End, the ancestral seat of House Baratheon, to meet with Lord Borros. However, he finds Aemond is already there making a generous offer: his betrothal to one of Lord Borros’ daughters in exchange for Baratheon swords and bannermen pledging loyalty to King Aegon II. Unable to compete with this proposal, Luke is sent back home to Dragonstone. Before he exits, Aemond demands Luke to cut out his own eye, just as he did to Aemond years ago. Borros stops the boys from shedding blood in his own home and Luke takes off into the storm, riding Arrax. Unbeknownst to him, Aemond and his own dragon, Vhagar, are on their tail. He chases them through the storm.

“It’s really a bullying sequence, torture sequence, chase sequence, where Luke is trying to escape,” showrunner Ryan Condal says in “Inside the Episode.” There’s “no real hope of Arrax fighting Vhagar…but Luke relies on the speed of his dragon and the maneuverability to try to escape.”

However, Arrax hits Vhagar with a burst of flames to the face, and she goes rogue. Vhagar ignores Aemond’s commands to obey him and calm down, instead chasing Arrax up above the clouds. In the end, Vhagar grabs Arrax—and Luke—in her enormous jaws, killing them both. 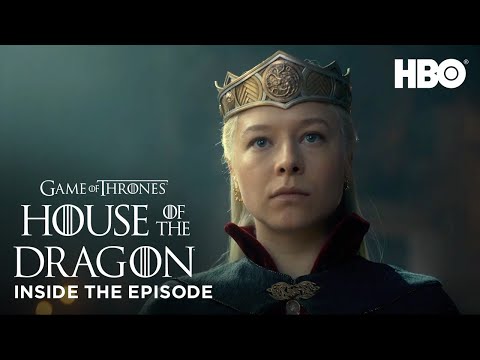 Aemond’s reaction here is one of shock and deep regret. He was even screaming “No!” at Vhagar when she chomped on his nephew and his dragon. “I think what you’re seeing in that moment there is the last vestiges of the little boy that’s left in Aemond. Maybe he was trying to scare Luke, but I don’t think ultimately he intended to kill him,” Condal says.

“But now he’s done it, and he has to decide whether or not he’s gonna own it in his travel back to King’s Landing,” he adds. “Because obviously if the usurping of the throne and [the greens] crowning Aegon in the dragonpit wasn’t the start of the war, certainly killing one of the queen’s sons is.”

Aemond, for his part, has felt “some kind of hatred” for being wronged by his nephew Luke, Ewan Mitchell says in “Inside the Episode.” His resentment has been festering for years, specifically after Lucerys cut out Aemond’s eye when they brawled as kids. (Lucerys was defending his brother, Jacaerys, and cousins, Baela and Rhaena, after Aemond claimed Vhagar, who belonged to the girls’ late mother.) The rivalry even dates back to earlier in their childhood: When Luke and Aemond were growing up in the Red Keep together, along with their brothers Jacaerys and Aegon, the boys ganged up on Aemond. During dragon training in episode 6, Aegon, Jace, and Luke mock Aemond for being the only one without his own dragon, and give him a pig with fake wings as a joke. As the years passed, Aemond would throw insults of his own at his Velaryon nephews, calling them bastards and/or “Strong” in reference to their real father, Ser Harwin Strong. It seems all of those feelings come to a head when Aemond and Lucerys run into each other at Storm’s End.

Whether he intended it or not, what Aemond ends up doing ultimately “starts the domino effect of the Dance of the Dragons.” 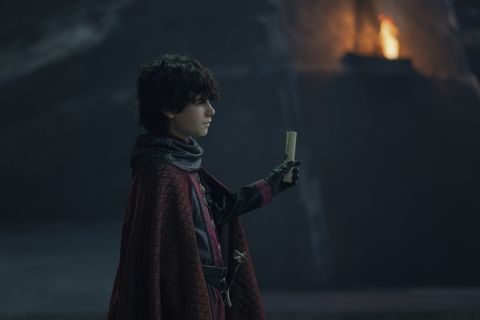 Up until this point, both sides were avoiding war and violence in ways that worked best for them. On the greens’ side, Queen Alicent refused to have Rhaenyra and her family executed after Viserys’ death while she plotted to put her own son, Aegon, on the Iron Throne. Even after his hurried coronation, Aegon (probably under the influence of his mother) offered generous terms to Rhaenyra and her camp, including allowing her to keep Dragonstone and roles in the royal court for her younger sons. And Rhaenyra, who has also been crowned, even considers these terms, despite how her husband Daemons is pressuring her to march into battle. She is staying true to the promise she made to her late father to unify the realm and holds off on sending dragons into war because she knows the destruction it will lead to. She’s just making sure of her allies in the meantime.

But Lucerys’ death will surely change all of that. Even amidst all the death and loss in House of the Dragon, this “moves the goalpost for suffering” in the show, Emma D’arcy, who plays Rhaenyra, says in “Inside the Episode.” “Once you’ve lost both your parents and you’ve lost a lover, maybe you think you know grief. And then what I think what’s so awful is that losing Luke tells us she knows nothing about grief, and completely changes her outlook on the world going forward.”

That change of heart is evident in the episode’s closing shot, which centers on Rhaenyra’s face after learning of Luke’s death. Condal explained to Variety: “The very last action line of the script was, ‘Rhaenyra looks up and war is in her eyes.’ That was in the first draft of that script. That was always the plan for ending the season, because after all this internal debate that Rhaenyra goes through over the course of the episode, everything changes the moment that she learns about the treachery at Storm’s End and the death of her son.” 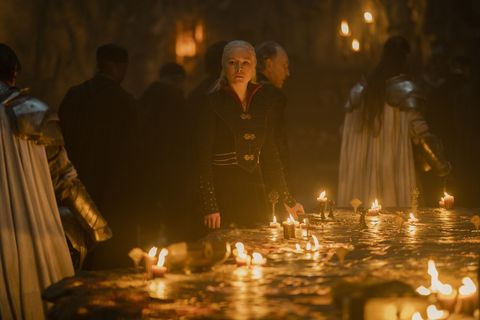 Condal told Entertainment Weekly that season 1 sets up “a very bloody feast to come” as Dragon progresses. Those who’ve read the show’s source material, George R. R. Martin’s Fire & Blood, know that that includes the avenging of Luke’s death with a gruesome assassination partly organized by Daemon. (We won’t spoil that here just yet.)

Along with hurling the blacks and greens toward war, Luke and Arrax’s death is a reminder that, despite the dragons’ bonds with members of the Targaryen and Velaryon families, these majestic beasts can’t be fully controlled and still have minds of their own. As Viserys told Rhaenyra back in episode 1, “The idea that we control the dragons is an illusion. They’re a power men should have never have trifled with.” As both sides prepare for battle with their fiery companions, maybe they should heed Viserys’ advice.