Jennifer Lopez, now Mrs. Ben Affleck, joined her new husband for a run to his beloved Dunkin’ Donuts on Saturday. The Daily Mail described the outing as Affleck “dragging” Lopez there. The photo agency put it more amicably: “Ben Affleck and Jennifer Lopez were out and about with their kids in Brentwood on Saturday, and they made a pit stop at Big 5 Sporting Goods to pick up some new gear. They were also spotted grabbing drinks and snacks from Dunkin’ Donuts.”

Lopez wore a white crop top and joggers with sneakers. She accessorized with a gray knit sweater and sunglasses. Affleck wore a blue plaid top, navy jacket, and dark jeans. He carried a Dunkin’ Donuts bag, while Lopez carried drinks. She seemed a little less amused than Affleck, but hey, it’s only one picture. 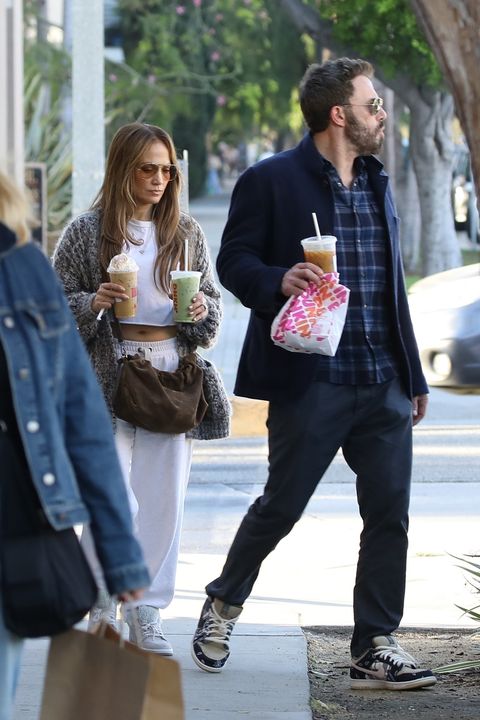 Affleck’s love affair with Dunkin’ Donuts, a chain started in his home state of Massachusetts, goes back years and has been well documented by the media. Affleck isn’t the type to shy away from owning his feelings for the chain, either.

When asked how he feels about Dunkin’ being in Los Angeles, Affleck told Collider in March 2019, “It’s amazing! I have Dunkin’ Donuts everyday. It’s very weird, I have it every day and people are always like, ‘Where is that? Is that near here?’ So, I feel like I’m spreading the word.”

Meanwhile, Lopez has made her own feelings about being Affleck’s wife pretty clear on her Instagram this weekend. The actress shared two posts of herself wearing Intimissimi lingerie, and in each, as LaineyGossip pointed out, she is wearing a ‘Mrs’ necklace.