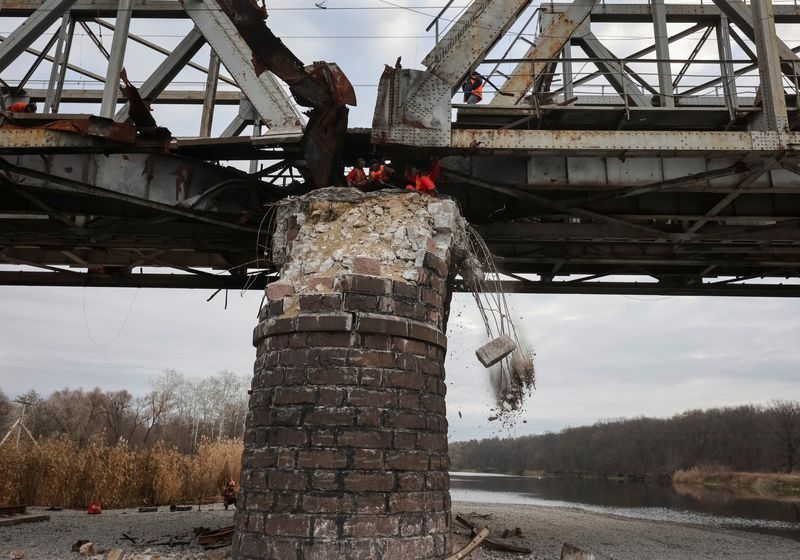 KUPIANSK, Ukraine (Reuters) – The head of Ukraine’s railway vowed to keep trains running and to repair the damage done to the network by Russian troops, highlighting how rail is the lifeblood of the country and how the system is vital to restoring towns devastated during the invasion.

Oleksandr Kamyshin, chief executive of Ukrainian Railways, spoke as he travelled by train through the Kupiansk railway hub, once used by Russian troops to resupply their frontline before the area was liberated by Ukrainian forces.

Kupiansk was one of an array of settlements Ukrainian troops recaptured during a surprise counteroffensive that caught Russian forces off guard in September.

“But whatever happens around, we find a way how we can fix it and keep running,” he said.

Recaptured sites like the city of Izium, south of Kupiansk, sustained an enormous amount of destruction during the war.

The railways have played a major role since Russia invaded its neighbour on Feb. 24. Millions of Ukrainians fled west by train into Poland and beyond. Trains are also supplying the frontlines.

“It is important to restore railway connectivity to retaken cities because that brings life back to cities. Once we restore passenger service, we will search for a way to restore cargo service. Because cargo – that’s exports, that’s what gives the blood, what gives the funds to the country,” Kamyshin said.

No shortage of trains, carriages or cargo cars will stop them, he added.

“We will find a way how we can keep running,” he promised.

The railway in September set a new record for the transportation of goods since the start of the war, said Valeriy Tkachev, deputy director of the commercial department at Ukrainian Railways.

“According to operational data, in September 2022, Ukrainian Railways transported 11.684 million tonnes of cargo,” he said.

This was an 8.4% rise in volume from the previous month. September also saw the transport of a record volume of grain cargo, 63.2% more than in August. Today, grain and milling products account for most export traffic, he said, as Ukraine’s Black Sea ports are blockaded.