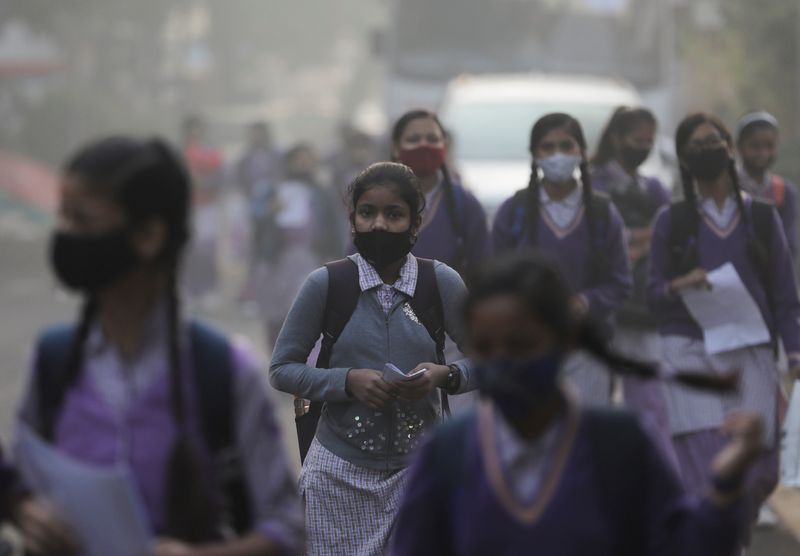 © Reuters. FILE PHOTO: School girls walk towards a school as they reopened after remaining closed for nearly 15 days due to a spike in air pollution, on a smoggy morning in New Delhi, India, November 29, 2021. REUTERS/Anushree Fadnavis/File Photo

NEW DELHI (Reuters) -Primary schools in India’s New Delhi will be shut from Saturday and restriction on road traffic will be considered, Chief Minister Arvind Kejriwal said on Friday as the capital continued to be engulfed by high levels of air pollution.

Several residents complained of discomfort in breathing and irritation in the eyes, nose and throat as the air quality index breached the “severe” and “hazardous” category in most monitoring stations, according to data from the Central Pollution Control Board.

A reading under the severe category, or over 400, affects healthy people, with serious impacts on those with existing diseases, the federal government says.

“We’re shutting down all primary schools in Delhi from tomorrow … Also shutting down outdoor activities for all classes above class 5,” Kejriwal told a press conference.

The decision to shut some schools came after concerned parents and environmentalists took to social media, urging the authorities to consider the impact of pollution on children.

District officials in Noida, a satellite city of New Delhi, on Thursday directed all schools to conduct online classes for students up to the eighth grade.

New Delhi is a city of about 20 million and the world’s most polluted capital. It is wrapped in smog every winter as cold, heavy air traps construction dust, vehicle emissions and smoke from burning of crop residues in the neighbouring states of Haryana and Punjab ahead of the new crop season.

The state government is also mulling restriction of vehicles on roads, Kejriwal said.

India’s federal pollution control board on Thursday evening banned the entry of diesel trucks carrying non-essential goods into the capital.