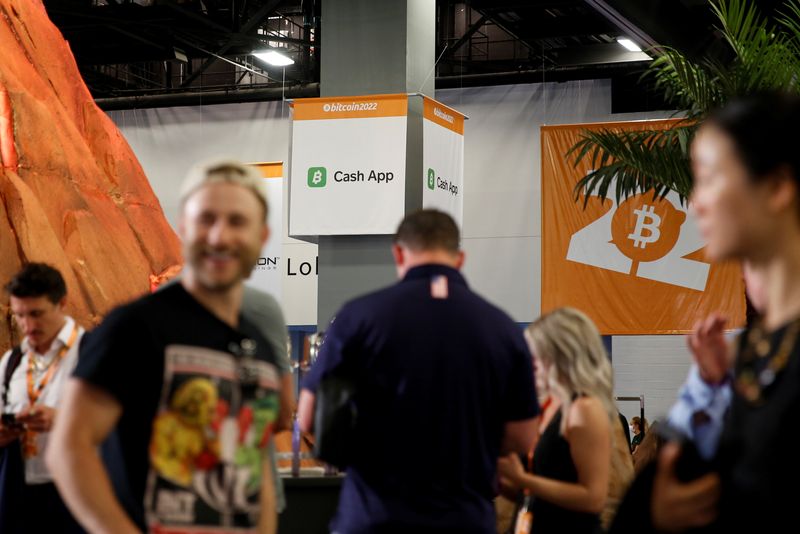 © Reuters. FILE PHOTO: The logo of Cash App is seen at a stand during the Bitcoin Conference 2022 in Miami Beach, Florida, U.S. April 6, 2022. REUTERS/Marco Bello

(Reuters) -Block Inc posted a rise in third-quarter revenue on Thursday as the growth of Cash App helped make up for stagnant cryptocurrency prices that had dogged the payments platform led by Twitter founder Jack Dorsey in previous quarters.

Shares of Block, formerly called Square, rose more than 14% in extended trading on Thursday. Prior to market close, its stock was down more than 66% from the beginning of this year.

The San Francisco, California-based company reported a 17% rise in total net revenue from the year prior at $4.52 billion in the third quarter.

Cash App, the company’s online payments service, increased gross profit by 51% to $774 million. The platform’s transactions rose to more than 49 million in the third quarter, up about 20% year over year.

The company reported a net loss of 2 cents a share in the three months ended Sept. 30.

Its unit that sells terminals and software for businesses to process payments, Square, generated gross profit of $783 million, up 29%.

Investor enthusiasm over bitcoin and other digital currencies has ebbed this year, as red-hot inflation and the U.S. Federal Reserve’s tightening of monetary policy have led to a sell-off in risky assets.

That has weighed on companies such as Block, which offers merchant payment services and an app that lets people trade the cryptocurrency, and was able to ride the bitcoin frenzy to post robust earnings last year.

In August, the company announced it had slowed hiring and slashed its 2022 investment target by $250 million, citing ongoing economic uncertainty.