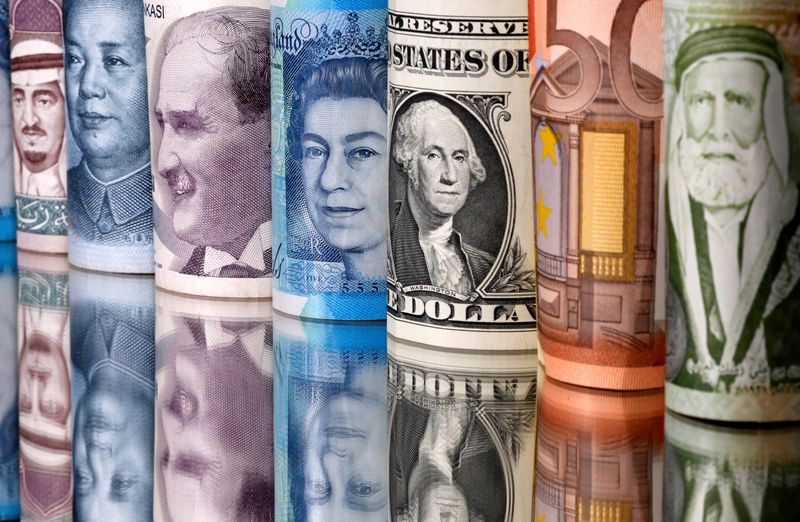 By Rae Wee and Alun John

SINGAPORE/LONDON (Reuters) – The euro and pound regained some ground on Friday but were still set for their biggest weekly losses since September, ahead of U.S. jobs data that could underscore the hawkish message Fed chair Jerome Powell delivered this week boosting the dollar.

Nonetheless, the European common currency was still set for a 1.9% drop on the week and sterling a 3.4% decline, for both the largest weekly fall since the third week of September, when Britain’s then finance minister Kwasi Kwarteng sent markets spinning with a now withdrawn set of fiscal policies.

The dollar strengthened across the board this week after Federal Reserve chair Jerome Powell on Wednesday said the central bank could continue to increase interest rates if inflation doesn’t slow, causing markets to price in a higher peak for U.S. rates.

In contrast, markets read a dovish message into authorities’ remarks around the Bank of England rate increase on Thursday and European Central Bank’s last week, while Norway, Canada and Australia’s central banks have also recently surprised on the dovish side.

“There’s a growing perceived chance that the Fed will be the last major central bank to throw in the towel and arrest its tightening cycle,” said Francesco Pesole, FX strategist at ING.

“We think this notion can provide quite sustainable support to the dollar into the new year.”

U.S. payrolls data released later on Friday will provide the latest indication of the health of the U.S. economy. A Reuters survey of economists showed them forecasting an increase of 200,000 jobs last month after a rise of 263,000 in September.

“An upside surprise to the data would reinforce the Fed’s higher terminal rate posture and keep the U.S. dollar bid, but softer prints can weigh on the dollar,” said Christopher Wong, currency strategist at OCBC.

Friday’s ‘risk on’ move in currencies, as well as commodity and share markets, followed reports China could relax its anti-COVID restrictions, which have been hobbling economic activity. [O/R] [MKTS/GLOB]

China’s health authorities will host a press conference on targeted COVID-19 prevention on Nov. 5 at 3 p.m. (0700 GMT), according to an official notice.

Separately, a former Chinese senior disease control official told a closed-door conference that substantial changes to the country’s zero-COVID policy were set to take place in the next five to six months, and sources told Reuters the country could shorten quarantine requirements for inbound travellers.

The yuan strengthened in both on and offshore trading, with the dollar last 1.28% lower against the at 7.2292, its lowest in a week. [CNY/]

“The currency market is the most accessible barometer to digest China’s risk sentiment without getting overly complicated,” said Stephen Innes, managing partner at SPI Asset Management.

“CNH (the yuan traded offshore) will tell you if investors are running hot or cold in China markets. And as is typically the case, this type of ‘risk on’ move indicated by the yuan will have a magnetic attraction across Asia markets.”

The Australian dollar, also a barometer of sentiment towards China given the countries’ close trade ties, rose around 1.5% to $0.6392, while the dollar also slid around 0.9% against the oil sensitive Canadian dollar and Norwegian crown.

A higher peak in U.S. rates also spells more pain for the Japanese yen, which has been a victim of widening interest rate differentials as a result of the Bank of Japan’s dovishness.

The dollar was last down 0.4% at 147.67 yen, with recent moves on the currency pair relatively more subdued on concerns about further intervention from Japanese authorities.