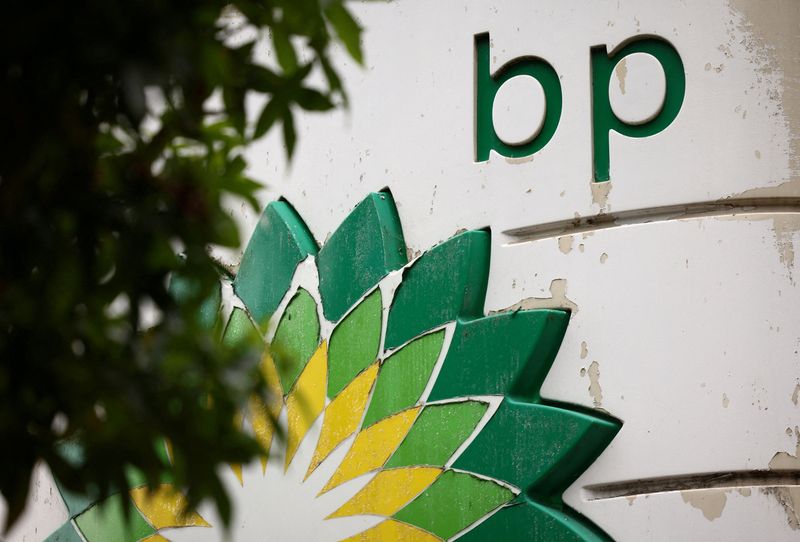 © Reuters. FILE PHOTO: A view of a signage outside a BP petrol station in central London, Britain, August 2, 2022. REUTERS/Henry Nicholls

By Ron Bousso and Shadia Nasralla

LONDON (Reuters) – BP (NYSE:) more than doubled its third-quarter profit from a year earlier to $8.15 billion and expanded its share buybacks by $2.5 billion, joining rivals in reporting bumper profits that have sparked renewed calls for energy companies to pay more taxes.

U.S. President Joe Biden on Monday called on major oil companies to stop “war profiteering”, threatening to hit them with higher taxes if they do not increase production.

BP said it expects to pay about $2.5 billion in taxes on its British North Sea business this year, including $800 million in a 25% windfall tax the government imposed in May.

British Prime Minister Rishi Sunak’s government should explore the possibility of extending that windfall tax on oil and gas firms in a fiscal statement due next month, the president of the COP26 climate summit, Alok Sharma, said on Friday.

BP paid $5 billion in tax around the world in the third quarter at a rate of 37%, finance chief Murray Auchincloss told Reuters.

Auchincloss would not comment on Biden’s statement, but said that BP is increasing the number of drilling rigs in the Gulf of Mexico and shale basins to boost output.

BP, which increased its dividend by 10% in the second quarter, will buy back $2.5 billion of shares after repurchasing $7.6 billion already this year. BP has committed to using 60% of its excess cashflow for shareholder returns.

The top five Western oil and gas companies paid out a record $29 billion in dividends and share buybacks in the third quarter, Reuters calculations show.

“With the BP share price sitting near its highest levels this year, today’s Q3 numbers were always likely to be political catnip if they were anywhere near as good as Shell’s last week,” said Michael Hewson, chief market analyst at CMC Markets UK.

Chief Executive Bernard Looney is leading BP’s pivot away from oil and gas to renewables and low-carbon energy in an effort to reduce greenhouse gas emissions. The company is aiming for a 40% cut in its oil and gas output by 2030.

Third-quarter underlying replacement cost profit of $8.15 billion, BP’s definition of net income, compared with forecasts of $6 billion in an analyst poll compiled by the company.

Earnings from the gas and low-energy division more than doubled from the second quarter.

BP holds the largest offtake contract from Freeport at 4.4 million tonnes per annum through 2040.

BP said it expected global gas prices to remain volatile in the fourth quarter owing to a lack of supply into Europe after Russia cut pipeline deliveries to the continent.