You can prevent traffic jams by changing one driving habit 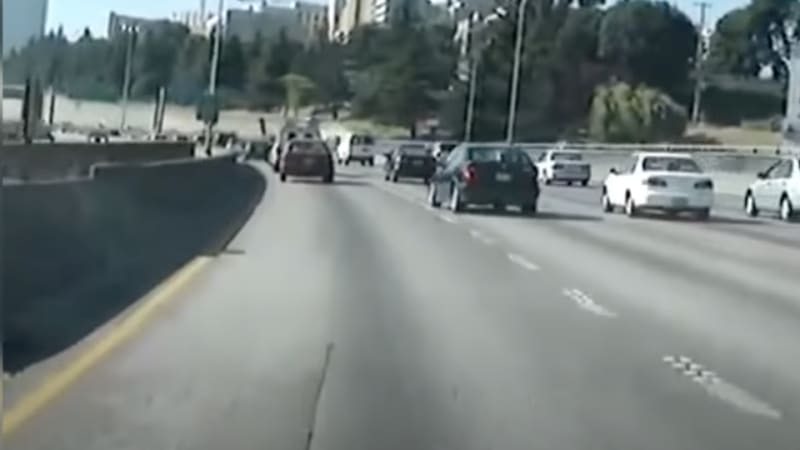 The worst kind of traffic jam is a “phantom” traffic jam — those backups that occur for seemingly no reason. Phantom jams leave you sitting there wondering: Why? Fact is, we do know what causes them, and we can change our driving behavior to prevent them.

On a recent road trip, my family got caught in two such jams — each on I-90 in Eastern Washington out in the absolute freaking middle of nowhere. Eastbound, we got jammed up for 15 miles over 1½ hours. Occupants in thousands of trapped cars clogged the cell towers trying to find out why. Turned out the state DOT had set out orange barrels in one lane; at least there was an explanation. On the return trip, even though I checked websites and traffic cams ahead of departure, we got stuck again, for a 30-mile stretch over 2½ hours. This time, no explanation. Traffic eventually and mysteriously broke loose, and everyone took their turn speeding away like a bat outta hell. Probably to find a restroom.

Being stuck gave me time to think about the science of traffic flow. It’s a discipline steeped in mathematics, with some human behavior thrown in. If you’re math-inclined, be sure to check out the federal government’s “Revised Monograph on Traffic Flow Theory” or some of the various research out of Delft University in the Netherlands, or MIT. Oh the formulas, oh the charts!

It might be simpler to just watch this now-legendary video from the University of Nagoya in Japan. Researchers put 22 drivers on a circular track and asked them to maintain a constant speed of 30 kph. Sounds easy, right? But guess what happened:

You’re no doubt aware of some ways to avoid traffic jams — at least highway jams, as opposed to those on “signalized” surface streets with intersections. For example:

But there is another simple suggestion you might be less familiar with — and that you might not entirely like the sound of. If even only some of us acquired this habit, we’d save ourselves a lot of grief.

What, you say? And let some jerk change lanes and get in front of me? Yes. Exactly.

When you’re following closely, or even at what we were taught was a safe distance, and a driver ahead moves into your lane or slows down, you tap the brakes. Maybe just for a second. The person close behind you brakes for two seconds, the person behind him for four. Then six, then 10, then 11, 12, 20. You’ve created a ripple effect. Some in the traffic-flow game have even borrowed a term from the movement of your bowels (how appropriate): a peristaltic reaction.

A simpler term for it: traffic wave or shockwave. The waves build and build, and soon there’s a jam. The folks at the back of the jam will never know that your little brake tap triggered the whole cascading mess. It’s the butterfly effect, played out daily across our highways.

What happened in that Japanese video is illustrative. Those cars were close. So, as hard as they tried to maintain spacing, they couldn’t. If there had been six cars evenly spaced on the track instead of 22, it would’ve turned out different.

Here in Seattle, which consistently ranks in INRIX’s worst 10 cities for bad traffic, an electrical engineer at the University of Washington named Bill Beaty gained notoriety, and earned a nice write-up in the Wall Street Journal (subscription required), by turning his miserable commute into a test bed for this long-following-distance technique. Researchers at several universities have tested his theories and declared them valid. You can read some of his thinking at his website, trafficwaves.org. (He also has an interesting website called Science Hobbyist and various YouTube videos.)

A WSJ reporter rode with Beaty while he demonstrated maintaining a traffic “bubble,” as he calls it (a video of their drive is at the top of this article). Cars moved into his lane without him having to apply brakes. “As merging cars come in, I don’t have to slow down, which means that nobody behind me has to slow down,” he says.

It’s counterintuitive, because your mind tells you: “I need to get where I’m going, so I should drive faster.” Your instinct is to close distance on the drivers ahead. “That’s the tailgating philosophy,” Beaty told the WSJ. “You push ahead, and you think if everybody would just push ahead, then everyone would go faster.” Instead, “it just turns the road into a parking lot.”

This technique does not mean you drive slower than anyone else. Just same as, and most important, farther from. It means driving not like a selfish individual but like you’re part of something bigger.

Some interpretations of the “bubble” approach advise you to space your vehicle evenly between the car in front and the car behind, so that the car following you has more space as well. But to me, that piece of the advice seems flawed — that driver’s spacing is not something you can control. If the guy in back is crowding you, and you try to split your distance front and back to compensate, he’s just going to keep climbing up your keister. So all you’ve done is relinquish your own following distance up front. But, other than its advocacy of this seemingly flawed “bilateral control” technique, the video above otherwise does a nice job of visualizing the wave dynamic.

Hey wait, you say: If traffic isn’t packed closely together, the road won’t carry as many cars. Well, there’s a lot of flow-vs-density discussions in the governmental and academic research mentioned above. But common sense would tell you that greater following distance allows for more consistent overall speed, which means greater throughput. A traffic jam is the antithesis of throughput.

Adaptive cruise for the win

Now, there is great promise to preventing traffic waves by using adaptive cruise control, as Beaty points out on his website. You’ll want to adjust your cruise to the greatest following distance it allows, of course, though even more following distance would be better. If you simply can’t bring yourself to shake your old bad habits of crowding the car ahead, adaptive cruise can help.

Remember that Japanese video from earlier? in the following video from an experiment conducted at the University of Illinois Urbana-Champaign, watch what happens when just one vehicle (the silver SUV) has cruise control activated:

Also, fewer jams means less idling means fewer emissions. And big fuel savings: As much as 40%. So you’re money ahead doing this.

Let’s circle back to those phantom jams we encountered in Eastern Washington: Had drivers been looking far down the highway while maintaining a vast following distance, they would have seen the orange barrels and warning reader boards sooner, and there would have been plenty of time and space to merge over at a minimal loss of speed and no braking. No brake lights means no jam. As for the jam encountered on the westbound trip home, that’s the classic phantom jam: We’ll never know what caused it. A bunny? Somebody rubbernecking? But you can be sure brake lights were the consequence. Which led to more brake lights. Which ultimately generated a traffic wave over 30 miles long.

Finally: Weren’t fully autonomous cars supposed to save us from all this? This video from PBS’ “Nova” two months ago pins its hopes on autonomy, but in the past couple of weeks it has become increasingly clear that full autonomy is turning out to be a pipe dream.

As always, a safe and uneventful highway drive comes down to us humans. So back way off, stay off the brakes, and don’t make traffic waves. Mercedes-AMG’s GT is nearly ready to retire, its successor is around the corner, but the