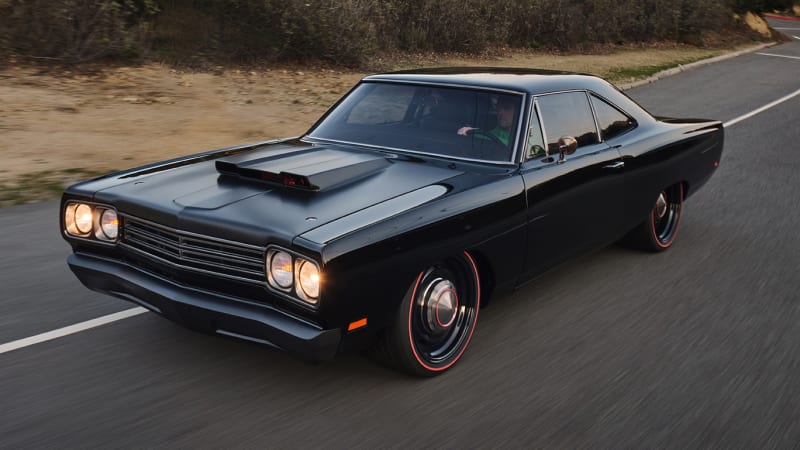 Kevin Hart’s known to enjoy a Mopar restomod, and is also apparently a fan of the Halloween slasher movie franchise. He’s combined the two fancies in this, a 1969 Plymouth Road Runner named “Michael Myers,” inspired by the obsessive dude with the blue coveralls, creepy mask, and stabby habits. It’s an odd choice of car, because as far as we can tell, the Road Runner never got a cameo in any of the 13 Halloween films. The Internet Movie Cars Database shows us Plymouths like the Barracuda, Belvedere, Duster, Fury, Satellite, and Valiant did. In any case, the Road Runner’s a beautiful choice despite the disconnect, Hart going back to work with builder Dave Salvaggio of Salvaggio Design and designer Sean Smith on a triple-black coupe boasting tons of orange details, from the glossy blood orange Whipple supercharger to the orange spatter pattern on the seats.

The project started with a Chrysler 383 big block V8 making 335 horsepower and 425 pound-feet of torque, shifted through a four-speed automatic. Salvaggio took it apart, scanned the body-in-white to create a set of custom frame rails, then cut out the floor and lowered the unibody into the new chassis. Behind the carbon fiber bumper and billet grille, the Whipple blower shoves air into a 7.0-liter Hemi V8 making 940 horsepower with the help of a Holley Dominator EFI system, shifting through a six-speed manual. There’s a Detroit Speed suspension working 19- and 20-inch HRE wheels, and a lot more carbon fiber from front to back to ease the load on both. Inside, a 3D-printed instrument panel and door cards mix with Dakota Digital gauges. Easter eggs on those gauges included a masked Michael Myers and a masked Road Runner.

The car already won the Goodguys 2022 Griot’s Garage Muscle Machine of the Year award last month. After brooding in the Meguiar’s booth at SEMA this week, it heads to Scottsdale, Arizona for the Speedway Motors Southwest Nationals.