Dodge and Mopar have a history of offering some sweet crate engines, and there’s no signs of that slowing. Over the next couple of years, the range of engines is expanding with options for both eight and six cylinders. Yes, the Hurricane twin-turbo straight sixes introduced on the Jeep Wagoneer will be available on their own for use in whatever you can fit them in. But Dodge isn’t done with V8s, as the brand’s ultimate Hellephant engine will have four variants.

The Hurricane engines, referred to by Dodge as the HurriCrates, are pretty much exactly what you’ll find in those big Jeeps, albeit without the Jeep. The base one, called Cat 1 (get it?) is the base engine making 420 horsepower and 468 pound-feet of torque, just like the base Jeep Hurricane. As with all the Hurricane engines, it has an aluminum block and head, the latter of which is a twin-cam piece. The exhaust manifolds are integrated into the head and are liquid-cooled. The intercooler on both is also liquid-cooled. On the Cat 1 engine, specifically, the turbos produce 22 psi of boost. The pistons are cast aluminum, and the compression ratio is 10.4:1.

The Cat 3 gets a number of upgrades over the Cat 1. It has forged aluminum pistons and ring lands, plus low-friction coatings on the wristpins. The fuel injection system is upgraded to flow more fuel, and the intercooler’s coolant circuit has an additional inlet. The compression ratio is reduced to 9.5:1, and the boost turned up to 26 psi. The power estimate is 550 horsepower and 531 pound-feet of torque, both of which are a fair bit more than the high-output Hurricane engine in the Grand Wagoneer L.

There’s even a race-spec Hurricane coming called the Cat X. Details for it are thin, but Dodge is estimating well over 1,000 horsepower for it. But the engine likely won’t be street legal.

The first of the HurriCrates to launch will be the Cat 3, coming in the second quarter of next year. The Cat 1 will be a longer wait, with an estimate of the first quarter of 2024. Pricing for both engines has yet to be set. Dodge will also have updated eight-speed automatic transmissions available for these engine, the first being called DC1 and suitable for engines making up to 560 pound-feet of torque. The other is the DC2, suitable for engines making more than 560 pound-feet of torque. That’s important, as these transmissions will also fit Hemi V8s. 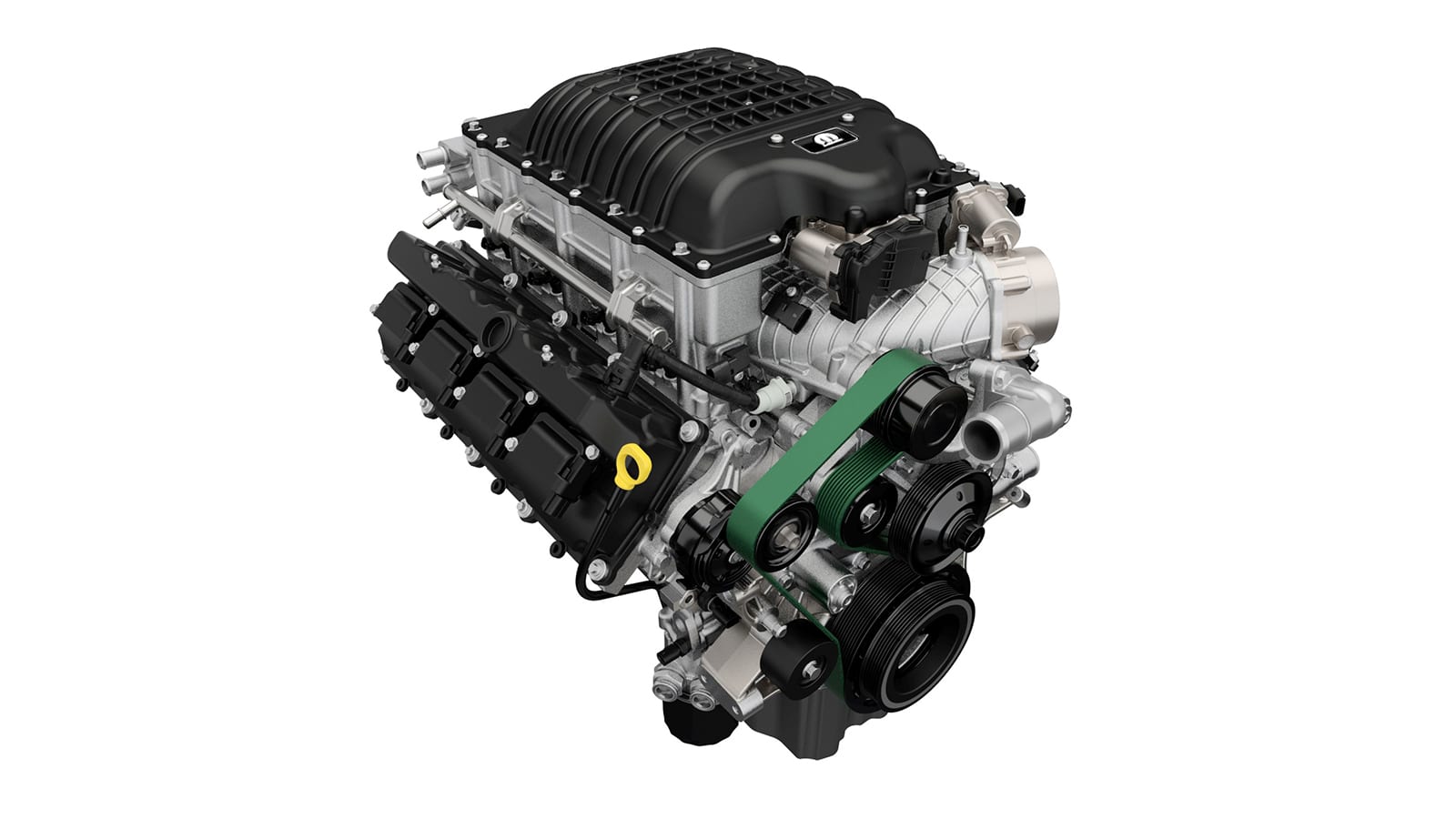 You’ll want one of those DC2 transmissions for any of the new Hellephant engines. And yes, what once was one wild supercharged 426 cubic-inch (7.0L) V8, will be a quartet of wild supercharged engines. The main difference will be a choice of aluminum block like the Hellephant we all know. But now there’s a cast-iron version. The cast-iron model is smaller displacement at 376 cubic inches (6.2L), but it makes up for that with a smaller 3.02-inch supercharger pulley (3.17 on the aluminum engine) on the 3.0-liter supercharger, and larger 105-mm (versus 92 mm) throttle body. While sharing the displacement of the Hellcat engine, the iron Hellephant has a variety of improvements to the valvetrain, connecting rods, bearings and main bearing caps.

The other difference among the engines is what fuel type it’s set up for. The base engines are tuned for premium pump gas, while the high-output ones are tuned for E85 ethanol. Naming-wise, the aluminum engines start with “A,” the cast-iron ones with “C.” The suffix for each references the fuel based on the alcohol proof number for what each will tolerate. The limit for pump gas is E15, so 30 proof, and E85 is 170 proof. So you have the A30, A170, C30 and C170.

Full specs and pricing haven’t been announced yet, and like the HurriCrate engines, the rollout is lengthy. The A170 will launch first in the second quarter of next year. The C170 will follow in the third quarter, and the C30 in the fourth quarter. The A30 doesn’t come out until the second quarter of 2024. Although pricing isn’t out, we do have the old Hellephant for reference, which started at just under $30,000. We’re betting the aluminum engines will be similarly priced, and the cast-iron ones will probably be a bit more affordable.